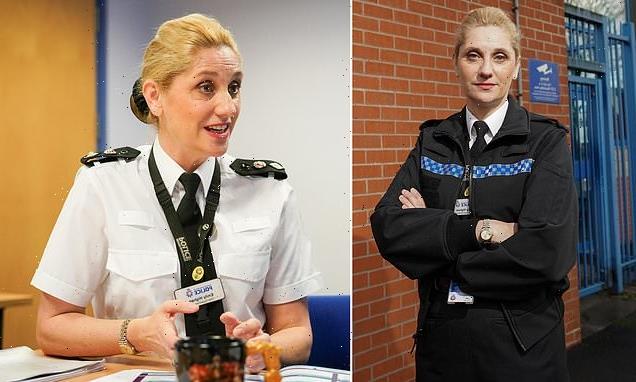 ‘I’m going to seize all your assets, your granny’s flat and your mum’s car’: Britain’s toughest police chief – nicknamed ‘Dirty Harriet’ – vows to take the fight to her town’s ‘hardcore baddies’

Wigan’s new police chief has vowed to take the fight to the town’s ‘hardcore baddies’ and warned that she’ll seize their ‘granny’s flat and mum’s car’.

Speaking today, Higham, who previously had the the nickname ‘Dirty Harriet’ in a nod to the Clint Eastwood character Dirty Harry, promised to bring down violent criminals in the area in a passionate call.

The married mother-of-two said: ‘There are those that are out there there raping and pillaging people walking around carrying knives and involved in organised crimes.

‘For those hardcore baddies? We’ll get your belly against my counter, because that’s what it’s about.

‘I’m gonna seize all your assets, I’m gonna seize your granny’s flat and your mum’s car and I’m going to come and target you because you are a blight on the communities.’

GMP was put in special measures following the discovery that it was under-reporting offences and latest figures show that only 4.8 per cent of reported crimes in the area are ending up with a court conviction.

As part of his efforts to turn around the failing force, Watson became the first police chief in the country to commit publicly to sending an officer in person to every domestic break-in.

He also vowed to quit if he does not leave GMP in a ‘demonstrably better place’ within two years.

Originally from Norley Hall in Wigan, Ch Supt Higham described her new role as police chief in her hometown as a ‘dream come true’.

She returned to GMP following secondment as head of the North West Regional Crime Unit.

Ch Supt Higham added: ‘I’m born and bred, I’ve never, I’ve never wanted to move. My family and friends are all here which makes it a little more special for me.

‘I always work 110 per cent but now I’ll work 150 per cent because what I do today will affect my children tomorrow.

‘I always wanted to come back to Wigan and thank you, Mr Chief Constable, you have delivered my dream come true and I’m still smiling.’

In a career spanning almost 30 years, Ch Supt Higham started out in Wigan as a response officer. She has since worked in areas like Salford, Bury, Cheetham Hill and Moss Side.

In April 2019, she was awarded the British Association for Women in Policing (BAWP) Lifetime Achievement Award for her work.

It was during her time in Moss Side that she took on the nickname ‘Dirty Harriet’.

She said: ‘I was posted to the gun and gang unit in Moss Side because I was the first female head of organised crime.

‘I remember saying to my husband, crying: ‘What do I know about guns and gangs? And it’s on the other side of Manchester.’

‘And he said to me: ‘Shut up Dirty Harriet and get on with it!’

‘It was a fantastic place to work, my husband came up with Dirty Harriet and when I was there they called me Dirty Harriet.’

In her new role, she is tasked with restoring the relationship between the public and GMP after the force was placed in special measures in December 2020. 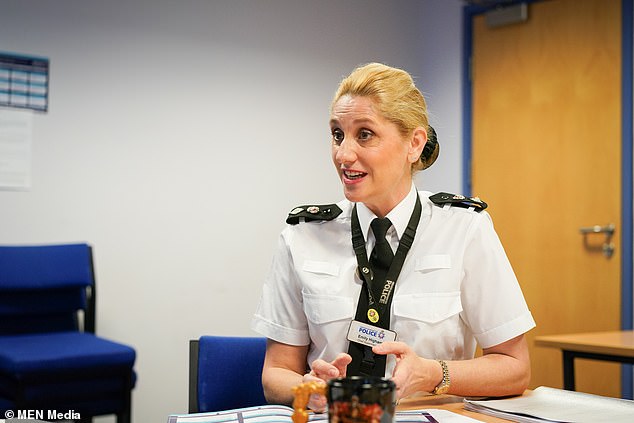 In April 2019, she was awarded the British Association for Women in Policing (BAWP) Lifetime Achievement Award for her work

And another report deemed the force was performing so badly it was putting the public at risk.

Commenting on the task ahead of her, she said: ‘We’ve got to rebuild the trust and confidence in the communities, we are a force in special measures and it’s been well publicised that we haven’t been picking up the phone, reporting the right number of crimes or getting to people in a timely manner.

‘What I want to reassure the public of Wigan and Leigh and all our neighbourly boroughs is that we have brought in a new process where our response officers are getting to you now.

‘If you do ring Wigan police we’ll get to you in a timely manner and we will offer you an appointment, we’re trying to go to victim-led policing.’

She said: ‘My grounding for victims was here because I went to some domestic abuse jobs that resonate with me still today.

‘There were some pivotal jobs here that I just thought: ‘This is just not right’

‘When I went into supervisory roles as a sergeant or as an inspector that’s when you start to have influence.

‘I brought in quite a lot of things that are now common practice across the whole GMP and the country and I’m quite proud of that.’

With police raids aimed at cracking down on organised crime in Wigan and instances of rising tensions between communities, Ch Supt Higham has made a plea to locals to use all the tools available to them to help the police help the community.

Ch Supt Higham said: ‘I am well aware of some of our areas where there are some community tensions, a lot of that of late has been the perception of the community.

‘We’ve had community tensions here in Wigan where when we’ve got to the bottom of that, it’s not as the public perceived it to be.

‘So it is about being able to bridge the gap and get the truth out there, and actually allay the fears and have visible policing.

‘But it’s also about the fact that sometimes it’s the community leaders and community themselves that have that voice and we will support them on that.

‘But my view is, if there is a community within any part of Wigan that feels they don’t have a voice, or that they are not getting visible policing or there are tensions that we are not aware of, then they must come forward because we cannot support communities if we don’t know about it.

‘What I have seen is where people and individuals have suffered in silence for a very long time and then when we do get the call, its at a real crisis point.

‘I don’t want that, I want people to have the confidence to come forward, so we can help support early intervention and nip things in the bud.’