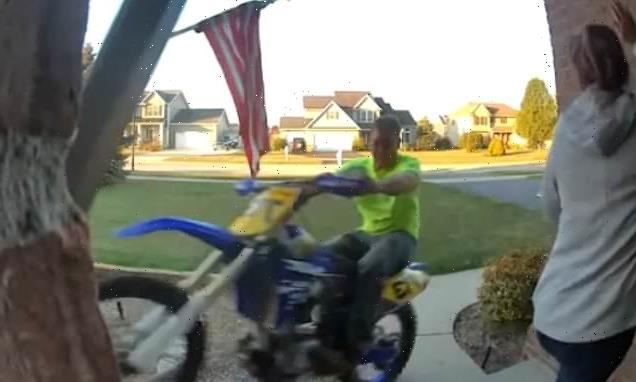 That was close! Woman has a lucky escape when motorbike plows into her porch after rider ‘hit the gas instead of the brake’

This is the moment a woman narrowly avoids being plowed into by a motorbike while standing on her porch in Ohio.

In a video shared online, the homeowner can be seen walking out of her front door in Columbus before a yellow and blue dirt bike is suddenly seen coming straight towards her.

She then quickly throws herself to the left to avoid being struck.

The man driving the vehicle swerves to make sure he misses her but takes out the wooden post of the porch before crashing out of view.

The woman can be heard shouting: ‘Roger!’ before walking around the corner to see the damage.

The man replies calmly: ‘I hit the gas instead of the brake.’

The woman then chastises him for not wearing safety gear, adding: ‘And you didn’t even have a helmet on!’

Bits of the wooden post and the American flag that was attached to it can be seen strewn across the ground.

The footage was captured by the family’s doorbell cam last Friday.

It’s not the first time such dramatic moments have been captured by the camera devices, designed to tell homeowners who is knocking at their doors.

A camera in Janesville, Wisconsin last year captured the moment a young man came within inches of being struck by a tree when it fell across his front yard during lashing rain and high winds. 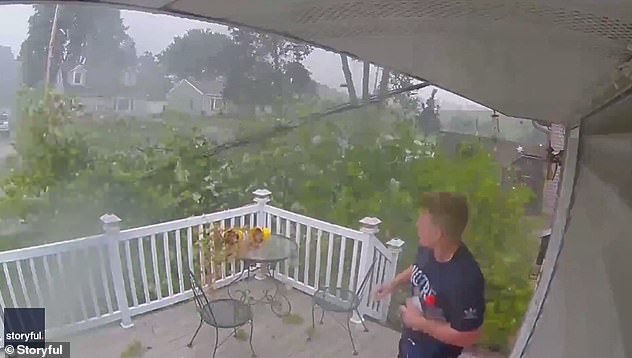 Timothy Sheetz was almost crushed by a tree when it fell during rain and high winds in Janesville, Wisconsin

Heart-stopping footage shows Timothy Sheetz head out onto his porch and lock the door to the family home.

But just as he is stepping onto the driveway the tree comes crashing down, sending him back up on to the porch.

The tree misses Timothy but it brings down the power lines stretching from the house to the street.

Relieved mother Lori Sheetz Blank posted the footage on social media, which showed how Timothy is undeterred by his near-miss, returning coming back into shot, skirting around the fallen tree and leaving.

Lori remarked: ‘The wires are right above his head. Aside from the tree he could have been electrocuted.

‘Thank you God for keeping him safe and giving us one more story to share. You are so good to us and we are grateful.’